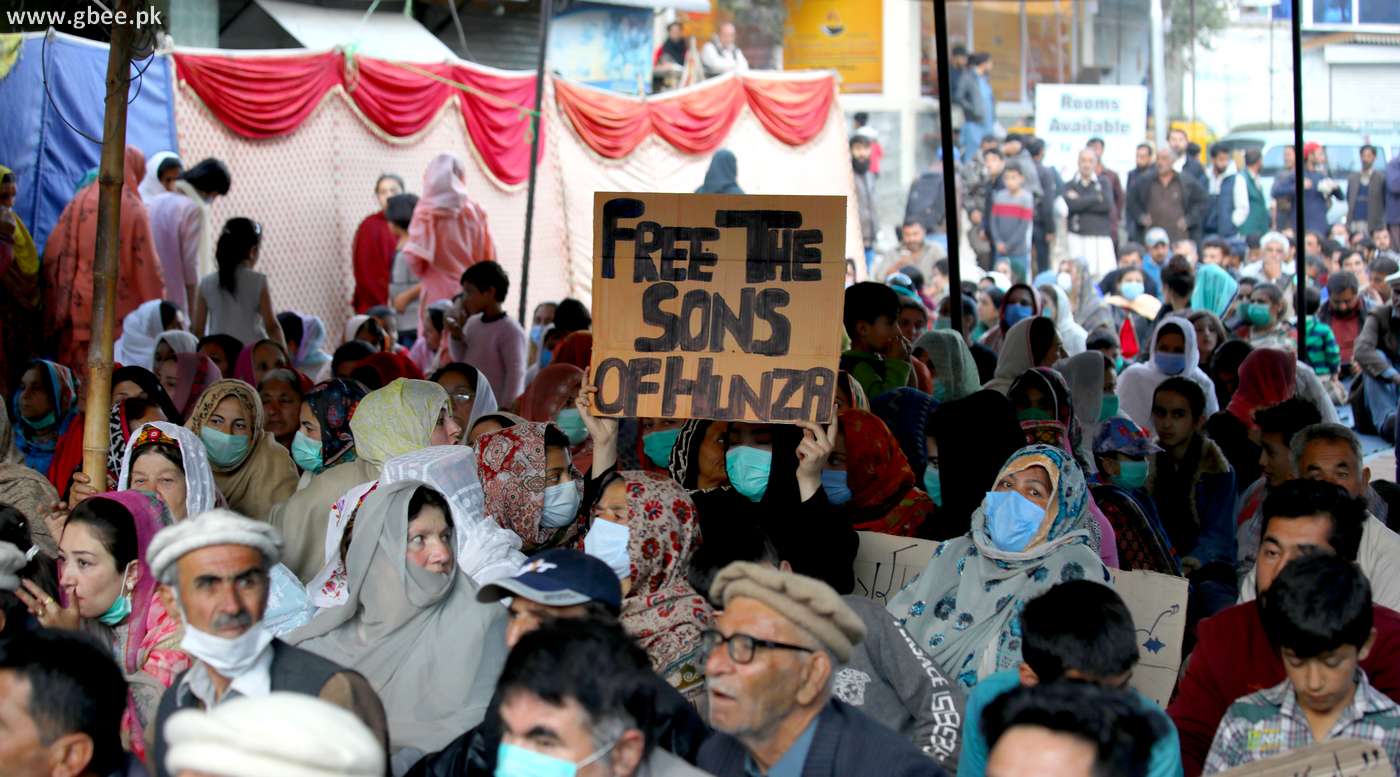 Hunza sit-in demanding the release of 14 political prisoners incarcerated for over 9 years under the Anti-Terrorism Act (ATA) enters its fourth day. The Hunza 14 were arrested in 2011 under the allegations of arson and destroying government buildings in the aftermath of opening fire by a policeman killing a father and a son while injuring several protestors who were the displaced affectees of the Ataabad incident demanding compensation during a visit by the then Chief Minister Gilgit-Baltistan Syed Mehdi Shah of the Pakistan People’s Party.

It must be noted that Baba Jan and his 13 comrades from Hunza have been actively advocating for the right to ownership of land, mineral, and water resources by the people of Gilgit-Baltistan with equal citizenship rights, way before the Atabad Incident. Baba Jan has been vocal on the issues of human rights violations across Pakistan as there is plenty of evidence on social media and YouTube regarding his vision and ideas.

The sit-in is primarily organized by the Aseeraan Rihai Committee which is a group dedicated to highlighting the plight of the political prisoners and their families. In an unprecedented move, the sit-in has blocked the Karakoram Highway in Aliabad town of Hunza. KKH is the only land route that connects China with Pakistan. The much-touted China Pakistan Economic Corridor (CPEC) is built on the same highway. Given the general elections in GB around the corner in November, the sit-in has attracted local politicians as hundreds of people gather every day and demand the release of the political prisoners. It is unprecedented because Hunza is somewhat of a sociopolitical paradox within Gilgit-Baltistan and Pakistan at large.

Hunza, on the one hand, is presented as a modern-day paradise in beautiful mountains with exceptional literacy rates ranging over 90% in certain villages, community organizations, women empowerment, and peace. Being opened up to the world earlier than many other parts of the region due to its location on the KKH complimented by the interventions by the Aga Khan Development Network (AKDN) in socio-economic development through community organization, health, education, women empowerment, conservation of historic sites, drinking water and tourism development projects.

Given a majority of the Ismaili Muslims, these interventions became a success as the AKDN had community acceptance which came a little late in the rest of the parts of GB. It is due to this developed image it is one of the highest visited tourist destinations in Gilgit-Baltistan. Hunza is, somehow, not very popular within Gilgit-Baltistan for its commercialized hyped up image and depoliticized status due to dependency on NGOs with very little interaction with the state.

It is felt that since the NGOs and their subsidiaries in the form of community based organizations substitute for the government in service delivery, very little need is left to be dependant upon the state. It is felt that the generation that has grown under the shadows of the donor-funded development has become depoliticised and prefers to refrain from the politics. This was somehow evident in the last tenure when the only seat in the legislative assembly was left vacant for three years due to dismissial of the sitting MLA and there was no representation for the constituency with no protest or demand by the local people and parties.

However, this sit-in for the release of the political prisoners protrays a completely different image of Hunza. Men and women of all ages led by the family members join the protest everyday. There are kids demanding the right to freedom for their loved ones. Women leading the protests are speaking openly about the injustices done by the state. A new wave of political leadership in the making can be seen. Seasoned politicians, lawyers and activists have been explaining the social, political, legal and constitutional issues of the region. This is the much needed civic education for the youth that will be participating in local politics.

We cant be sure about the imediate outcomes of these protests as the sit-in enters its fourth day today but in the long run it will have tremendous impact on political landscape of Hunza. This is evident from the support shown by left leaning parties across GB who have joined the protests directly or shown solidarity by protesting in their own constituencies. Demands are being made to release the innocent political prisoners under a presidential decree while boycotting the upcoming elections in GB is also under consideration.

It is high time for Islamabad to rethink its policy towards Gilgit-Baltistan at large as the people are coming out of a slumber and are gradually becoming aware of their importance with respect to their relationship with Pakistan. From now on, this realization will lead to the dynamics of the relationship in contrast to the unconditional one-sided love affair that has led G-B in general and Hunza in particular to this stage.

Starting with the release of political prisoners, policy formulation and constitutional amendments to provide equal citizenship rights, autonomy, ownership of the resources, and access to the highest court in the country with or without provincial status is the need of the hour. Further negligence of this situation or even worse, kneejerk reactions by the state in form of labeling people in a peripheralized region (for whatever reasons so far) asking for their due rights as “anti-state” would add to frustration and alienation of the people leading to protests, violence and political instability in the region.

The dreams of regional political stability and success of the China Pakistan Economic Corridor (CPEC) cannot be fulfilled without a politically stable and content Gilgit-Baltistan to which Hunza is the gateway and first point of contact.

Rizwan Karim is a graduate of the University College London in the UK. He works in research and is interested in the politics of development in Gilgit-Baltistan.