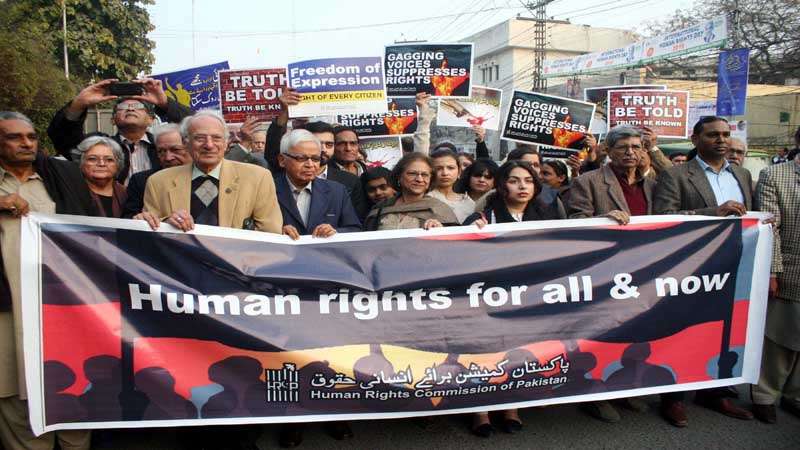 “The Universal Declaration of Human Rights” remains as relevant today as it was on the day in 1948, when it was proclaimed and adopted by the United Nations’ general assembly. A document that, for the first time, articulated the rights and the freedom for which every human being is equally and inalienably entitled. Its global nature is a yardstick by which we measure right and wrong.

The members of the United Nations are signatories to this document, which has an extraordinary vision to safeguard all human beings in this universe from discriminatory treatment by the states or otherwise. Either kingdoms or democracies but unfortunately, despite having such a golden document, there are dire illustrations that, even in most of the member states of united nations, the human beings are being subjugated to, against their will and wishes by the states but UNO discriminatorily ignores rather strengthens such violations of mighty states against the oppressed people within their domination. Kashmir and Palestine are the chronic and popular instances in this regard.

Kashmir is under the forceful occupation of India since 1947 but people in occupied Kashmir never ever surrendered to the atrocities of Indian governments from day 1 of their occupation. The Indian government, once in history, scared and could not control the struggle of people of Kashmir and to rescue herself went to UN, seeking its help in resolving the issue. The UN passed various resolutions, calling for holding a plebiscite in the state. The resolutions were accepted by India.

Prominent leaders of India also repeatedly promised to hold a plebiscite. However, they resiled from their promises with the passage of time, strengthening India’s control through atrocities extended by the Indian army, imposing black laws and their implementation. At this juncture, I really emotionally want to appreciate the tolerance and persistent struggle of Kashmiris in held Kashmir. They really do not bow their heads; India failed to overcome the indigenous struggle and protest of Kashmiris against the pandemonium and forceful occupation of their motherland. They are sacrificing their lives; they are standing in front of Indian army to face their bullet.

Kashmiris always launch their protest and invite the attention of international community, particularly, those powers who are signatories to UDHR, to take notice of violations and cruelties extended by the Indian army against the armless Kashmiris. The stunning, international community, UNO and international powerful states have forgotten the golden document of the universal declaration of human rights and have turned deaf and dumb towards severe human issues in occupied Kashmir, but the Kashmiris never abandoned and their struggle is in progress day by day.

They didn’t lose their hearts that is why they have fixed 5th February a day of their solidarity all over the world to jolt the international community’s conscience to rise against Indian atrocities.

Worth mentioning here that, the Kashmir issue is not only the oldest issue on the agenda of United Nations but is also an unfinished agenda of the partition of the subcontinent. As per the partition plan, it was up to the will of the population of princely states to preferably join either India or Pakistan but in case of Kashmir, Indian army, in violation of agenda, intruded into Kashmir against the will of Kashmiris therefore, they stood up against Indian army, took up arms, liberated some areas of the state and established an “Azad government of Jammu and Kashmir”.

The Azad government has its interim constitution and enjoys a system of their own, joining the struggle for the liberation of their motherland remaining in forceful occupation of India joining hand with the indigenous struggle of people in occupied Kashmir through peaceful struggle and agitations for awakening the conscience of community.

Gilgit-Baltistan, a region surrounded by lofty mountains, having big deposits of glaciers, bonded to China from one side touching middle south states crossing a small strip of Afghanistan, adjacent with occupied Kashmir from another side. The region remained aloof from the outside world, having its own small states headed by local chieftains up to the last decade of the 18th century. The region was invaded by Maharaja Forces.

There were 2 or 3 mighty wars between local forces and Maharaja Troops but lastly, the year 1 st November 1948. It was the time of partition of United India; the people took arms, liberated their motherland from the occupation of Maharaja government with the zeal to merge the region with Pakistan and acceded to newly born state. Pakistan took the sovereign authority of the region but attached the area with Kashmir issue as per prevailing situation of that time.

The overwhelming native population living there in Gilgit-Baltistan is not Kashmiri by caste. Despite, the region is 3 rd part of Kashmir issue as such the people therein are deprived of their constitutional status in Pakistan since their independence while the people of Gilgit-Baltistan are emotionally Pakistanis and persistently demand their constitutional status. The educated youth of the region is deeply frustrated
about their fundamental rights. The government needs to solve this issue too.