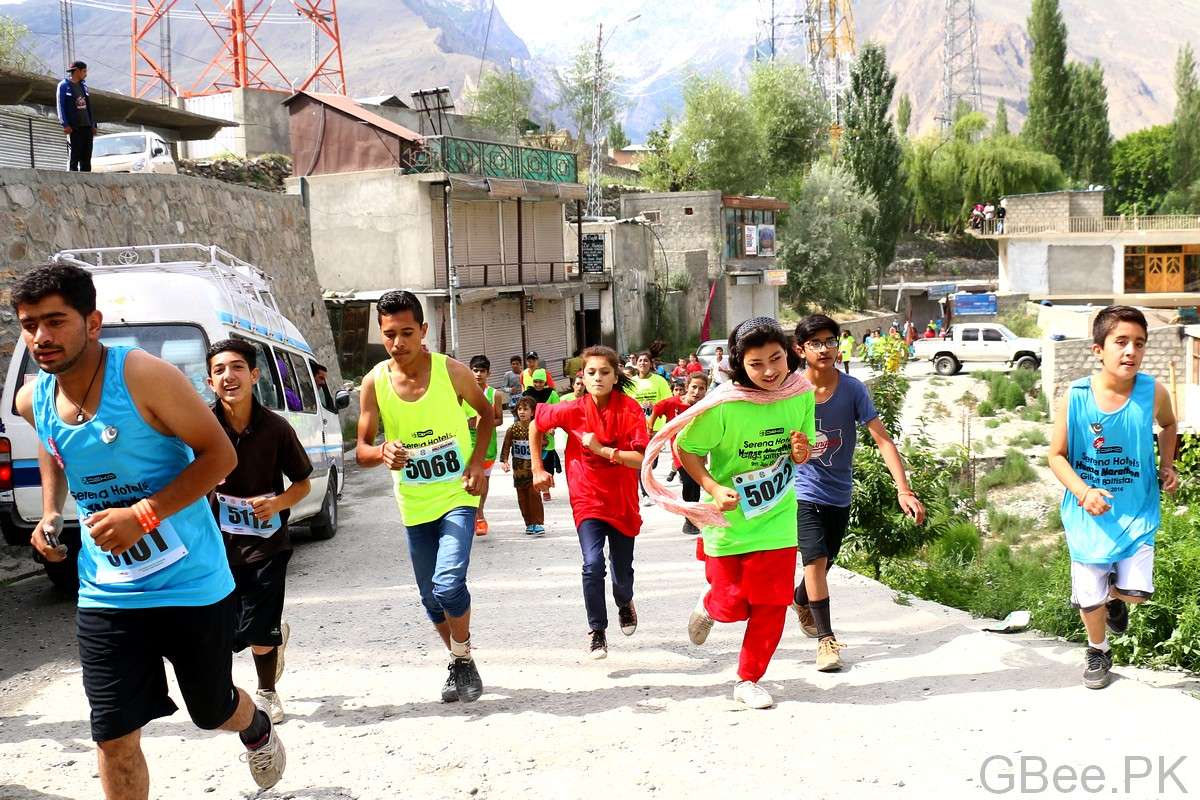 The much anticipated Hunza Marathon has concluded in Karimabad today. More than 200 local, national and international runners participated in 3 different categories; the 4th one being a practice-run to be arranged later this week down the hill from Khunjerab Pass. Prizes were distributed among the winners at a ceremony attended by Governor of Gilgit-Baltistan Mir Ghazanfar Ali Khan and many others at Baltit Serena Inn.

Starting at 5:00 AM in the morning, the 42-km long full marathon was kicked off. A total 7 laps were covered between Zero Point in Karimabad and Tutan Shun in Hyderabad town. The 10-km and 5-km long segments were started at 9:00 AM with the same starting and return points. The awards distribution and closing ceremony was held at Baltit Serena Inn later in the evening.

While talking to GBee.PK, Ziyad Rahim, who had first envisioned the Hunza Marathon, showed his satisfaction about the participation of runners and services of the volunteers. He said he is looking forward to continue the marathon next year with even better arrangements.”

Earlier, he talked about how he got to meet Mirza Ali and Samina Baig while they were returning from their Antarctica expedition.

“I met these two after their return from Antarctica. I shared the idea of a marathon in Hunza which they agreed to collaborate. We were lucky to have Serena Hotels as our main sponsor. Things were smoother than expected due to the collaboration.”

“I have seen great potential in the athletes of this region. I am sure with proper training, we can have world class runners from Hunza. We will continue the marathon as part of Pakistan Running Series.”

Babar Khan, who was one of the participants of the 5-km marathon was excited to finish the race, but at the same time he had some reservations about management. He said “There were some cases of mismanagement that I encountered during the race,” He added: “Since this was the first ever such marathon in the town, I expect a better event next year. I will participate again next time with better preparation.”

Ramiz Ali, another participant of the marathon was unhappy about the traffic which was not diverted or stopped during the marathon. He said that government should also take stake in such events and coordinate with the management for a better marathon experience. He pointed out that some of the runners of 5-km long marathon cheated by taking a ride in places where no management was present.

Medals and certificates were distributed among the winners by Mir Ghazanfar Ali Khan. He showed his interest to support such events in the future.

The winners of Hunza Marathon are as under: