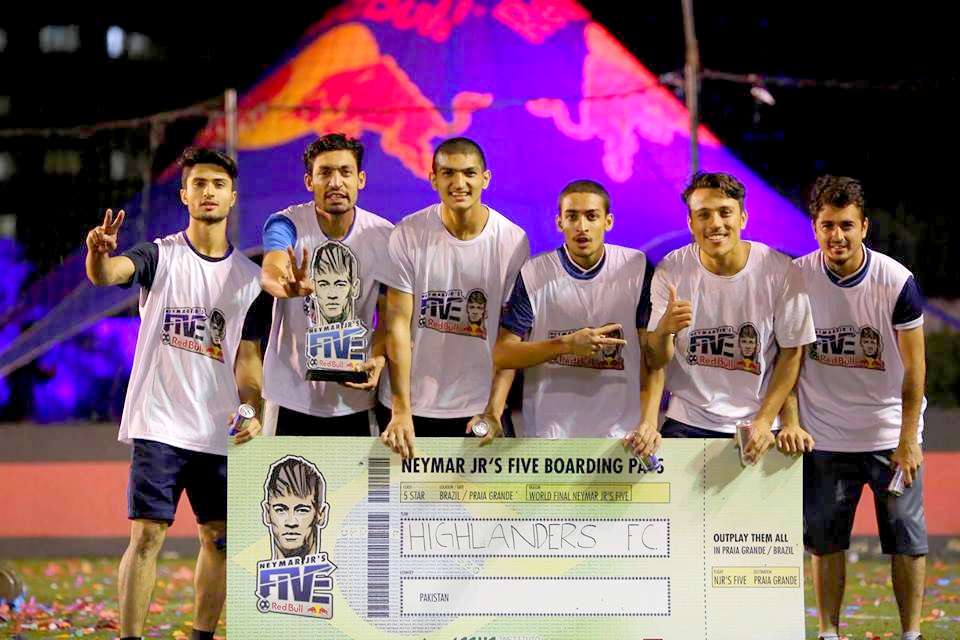 Sponsored by Red Bull, the national final of Neymar Jr’s 5 was played at Total Football ground on late Sunday night in Islamabad.

Highlanders FC took home ground advantage and managed to lift the national cup in a suspense-filled final match. Highlanders FC proved through their gameplay that they have a better skill-set compared to the opposition to play at the upcoming global event.

Neymar Jr’s 5 Global Final will be played in Brazil this year in the month of July. Highlanders FC will represent Pakistan at the global event where teams from across the globe will compete at Neymar’s Five Global Final 2017. The event is scheduled to be held at Neymar Jr’s Instituto Projeto in Praia Grande, Brazil.

In its first year, Neymar Jr’s Five had over 65.000 players take part from 47 countries… But now, in 2017, the tournament is bigger and better than ever. More than 50 countries, spread over 6 continents will host tournament qualifiers in a bid to have their National Finalists take home the trophy! In a contest this competitive, do you and your team have what it takes to outplay them all?

Neymar Jr’s Five is fun, fast and technical – the ultimate kick about with your best mates, and just how I learnt the skills I play with today.

Last year, Highlanders FC was not able to reach the final, however, this time they have put together a great combination to bring their dreams into reality. In a press release, the PR Manager said:

This year there were a total of 74 teams from only Islamabad-Rawalpindi region double of what we saw last year and a total of 400 teams from all over Pakistan. A winner from each city qualified to fight it out in an a knockout stage of 4 teams. Atlético De Jwani from Karachi, Fantastic 5 from Lahore , Jinnah FC from Islamabad and Highlanders FC from Islamabad made it to the knockout stage. Atlético De Jwani faced Fantastic 5 in the first semifinal and Highlanders faced Jinnah FC in the second semi. Fantastic 5 won by a single goal margin, while Highlanders won comfortably with a margin of 3 goals.

Highlanders Football Club was founded by Safdar Ali Balawar who is currently serving as the club’s CEO. Highlanders have also started an academy and teams in different age groups for males and females. Highlanders also have a polo team. The clubs is supported by local sponsors.