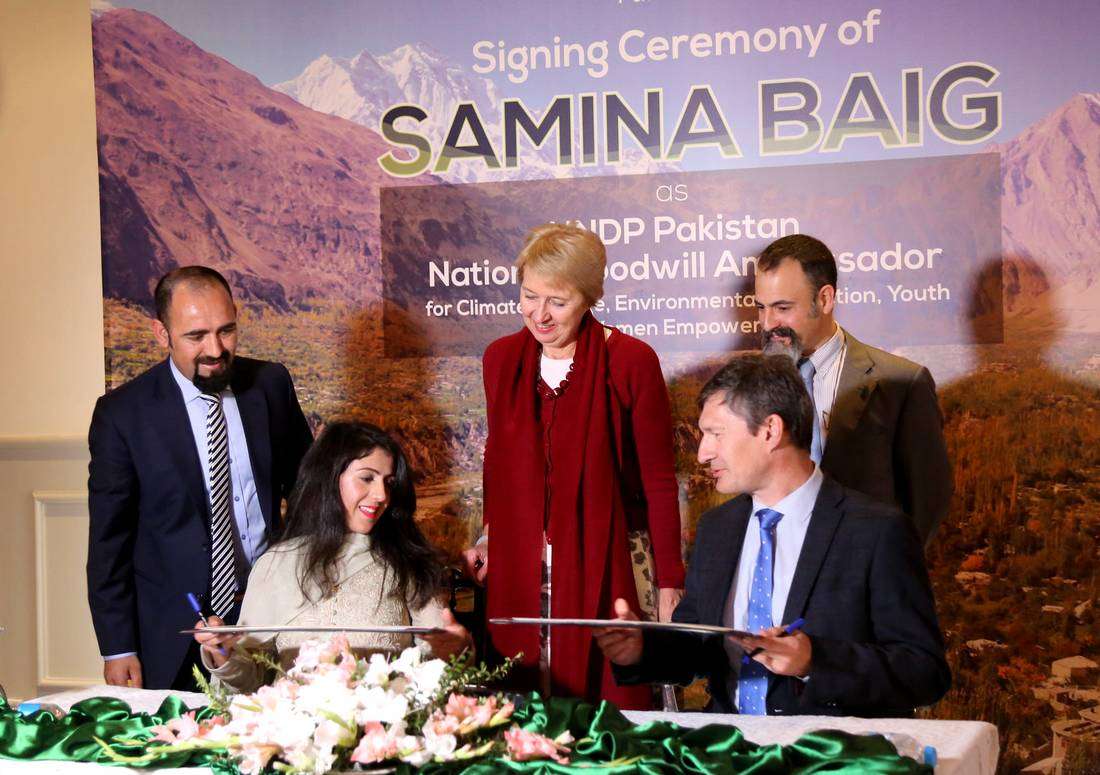 Samina Baig poses with UNDP officials during the signing ceremony.

The United Nations Resident Coordinator in Pakistan, Neil Buhne said “Pakistan is amongst the most vulnerable countries in the world to climate change. Preparing for its effects, and instituting environmental protections, will safeguard economic development for future generations.”

He added “Moreover, half of Pakistan’s population, its women, are under-represented in education, the workforce and in decision-making. Empowering women to play their full role in society is not only an ethical imperative, it is essential for sustainable development.”

Neil Buhne highlighted that UNDP’s National Goodwill Ambassadors are leaders in their societies and role models for all.

UNDP Pakistan Country Director Ignacio Artaza highlighted the responsibilities of Samina Baig as UNDP National Goodwill Ambassador For Pakistan. “As the National Goodwill Ambassador for Pakistan, Ms. Baig will use her profile to shine a light on the issues that shape Pakistan’s future, and build the partnerships required to address them,” he said.

While talking to the audience at the signing ceremony Samina Baig said “With my brother, I have experienced a significant impact of global warming and climate change on our mother earth. I am honored to be the national goodwill Ambassador of UNDP to spread the voice to take a serious step to counter global warming and raise voice to empower young girls to climb the highest level within their field of profession.”

Samina Baig was born and raised in Shimshal Valley in the Hunza district, Gilgit-Baltistan. At the age of 22, she became the first Pakistan women to climb world’s highest peak. A year after she scaled Mount Everest, she successfully climbed the highest peaks in every continent.

Samina Baig’s attempt to summit K2 was abandoned due to an unfortunate injury that left her in bed for several weeks.